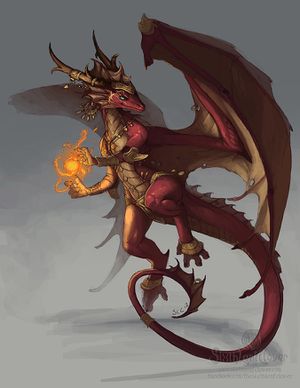 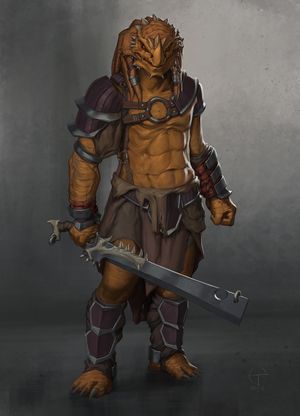 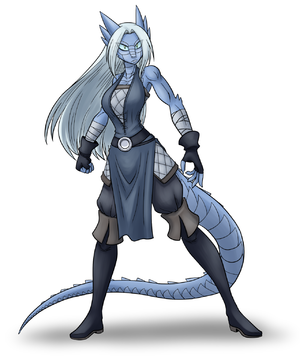 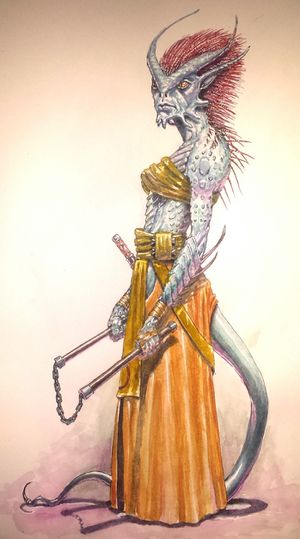 Dragovians are the dominant race of the Lung Islands. Appearing more humanoid than traditional dragons, they are superior spell-casters and have a strong warrior culture that is nonetheless disappearing. Think of them as a cross between Elves and Samurai.

Dragovians speak an ancient, loquacious language known as Dragovian. They have a feudal system under an Emperor, a giant Dragon slumbering inside Mount Moromah. Since the emperor has been dormant for thousands of years, real power resides in the matriarchal family clans. Beneath them, Warlords and warrior monks pledge fealty and jockey for power. The most powerful clan is the Vohlok, led by Princess Briila. Her manipulation of other clans has minimized conflict and kept her family in power, but the peace is fragile.

Obligate carnivores, Dragovians fish and hunt for food, which keeps their population small or dwindling. Their cities are great stone aeries built on the top of mountains or coastal cliff faces by their ancestors. The giant architecture filled with lost symbols suggest that their ancestors were all huge dragons like the emperor. Theirs is a society on a slow decline.

The Dragovians worship a pantheon of dinosaur-like dragons and believe their giant sleeping emperor is one of the Gods' direct descendants. These Gods fought great demons in order to create the world and sealed these evil spirits underground. Some Gods include; the giant flying Ketzal (looks like a Quetzalcoatlus), patron of the Jerbord, and Ankylo (think flying Ankylosaurus), patron of the Fassnu. After defeating the demons, the Gods built great cities throughout the Islands that the Dragovians inhabit now. Then they mysteriously disappeared. Their magic is alchemical secrets passed from the Gods down to the Dragovians.

The heretical Bogovey do not believe their ancestors were Gods. Rather, they think that the demons—or spirits of the Islands—are the real manifestation of power and worship them. Their scholars think Magic is a force deposited on the Island through Mount Moromah's eruptions. There exists a pure world of magic, the world of the Oni, underneath their world.