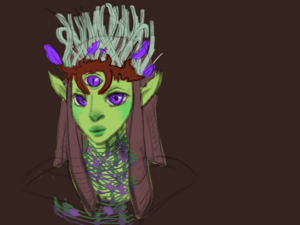 Inora Ithkal is a Healer of the Fae of the Land.

Raised deep in the jungle of Yokai, Inora learned magic from a young age from her aunt, the clan's witch. Like other Fae in her tribe, she devoted herself to the Lord of the Forest, Shiramba. Yet, she always felt a little different. When Hengeyokai merchants would come by, she'd sneak out and observe them. When Dragovians would send out their warriors to explore the forest, she'd try and learn their language and manners. Her aunt warned her: if Shiramba finds out about her fascination with other races, she will be exiled. But she didn't listen.

When the Humans invaded the Islands, she immediately fell in love with Shun He, the blind explorer. She begged the Lord to become their allies. If the war with the Dragovians reached them, they would need the human's help. Shiramba agreed, but if the Humans did anything wrong, the folk destroy their colony. And if he ever discovered her relationship, Inora thought, she would face even more dire consequences.