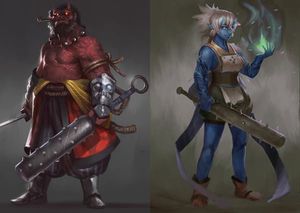 A long time ago, the Vohlok Dragovians fought a religious war against a heretical sect. The heretics summoned the demonic Oni as soldiers and devastated the islands. The Vohlok won and drove the Oni back and sealed their Demongate. The Volhok also used their magic to make the heretics flightless. The heretics became the Bogovey.

Some lesser Oni remained and settled on the cold barren island Krah near the sealed Demongate. Their time on the island has made them more civilized, and they live in warbands constantly fighting against each other or as mercenaries for the occasional Dragovian warlord. These lesser Oni resemble demon like ogres, orcs, and trolls. They are blue and red.

However, Greater and more chaotic Oni can be summoned by any magic user on the islands. Some have exchanged their services for freedom and now roam a swamp or haunt a ruined castle. The Bogovey still regularly call upon these creatures.