Princess Briila is the leader of the lead Dragovian tribe, the Vohlok. She was the former High Priestess of their faith. 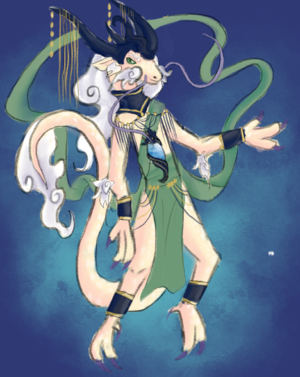 Her name means "beautiful magic", and since her birth Briila was raised to be a priestess of Mount Moromah. Lir, her father and the Daimyo of the Vohlok, had many children, and Briila was content to give up any royal ambition for a life of study. But fate had other plans for her. Harnessing the magic of the mount, Lir declared himself Shogun and waged war on any clan that refused fealty. The ensuing battles took their toll; many of Briila's brothers and sisters died in combat. In the end, it was Agfen, Briila's brother, who won the decisive battle against the fierce Fassnu and ended the war.

However, terrible rumors persisted about Agfen's victory and the mysterious magic he used to secure it. Visiting the battlefield, Briila discovered that her brother had used dark magic to recruit demons to fight by his side. She told her father and as punishment, he stripped Agfen of his titles and of his wings. In revenge, Agfen cursed his father with madness. Before completely losing his wits, Lir announced Briila would be his new heir. A political neophyte, Briila must now defend the Vahlok from enemies all around her: her rebellious brother and the other clans. Shun He's human expedition is her first test. If she fails to destroy it, the other clans will surely know her weakness and destroy her family.