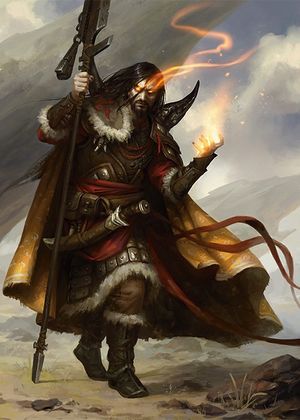 Shun He, Grand Alchemist of the Lotus Empire

Shun He is the Grand Alchemist of the Lotus Empire, a blind monk and leader of the Human settlers.

Shun was born in the desert kingdom of Yunnon, the son of an advisor to its great Khan. When the Lotus Empire invaded Yunnon, he was captured and refused to swear fealty. His bravery impressed the Lotus Emperor so he let Shun He live in servitude, but blinded him as punishment. For the next 20 years, Shun devoted himself to the study of Lun, the faint magical substance that pervades the world.

Blindness forced Shun to adopt a rigorous scientific method, experiencing the world purely through science and mathematics. It also protected him from the sneers of the nobility at court — his outsider status and foreign appearance made Shun the frequent victim of the royal jester. When his research led him to discover the fabled source of all magic, he so impressed the Lotus Emperor that he commissioned Shun as his blind explorer. And any courtier that dared laugh would be immediately sentenced to death.

Arrival in the Lung Archipelago

With the support of the emperor, Shun began construction of the Lungcao, a grand junk holding a few hundred men and enough resources to survive a short while on what he believed to be a fertile island chain.

The journey began at sea with observations of the Lunopause, a powerful storm Shun understood to be shielding the islands. These observations were mediated by a weakly magical sextant Shun used to navigate by touch. Shun realized that the supposed magical shielding built into the Lungcao was unnecessary. The key to visiting the islands was using the sextant to navigate through an illusory part of the storm. However, he never revealed his insight to his crew.

Despite his efforts, the Lungcao sustained serious damage by the other side of the Lunopause. Shun directed the crew to make landfall at the first sight of sand. Passing a stony, treacherous island, they arrived at an alluvial beach.

There, Shun made first contact with Inora, a three-eyed Fae healer and sea priestess.