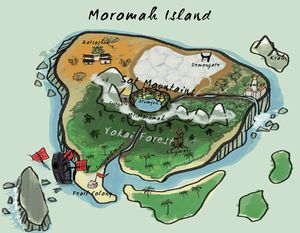 Greetings, settler! The world's greatest explorer, Shun He, leads an expedition to find the fabled source of all magic. After many months at sea, his ships pierce a magical barrier and crash on a mysterious Volcanic island. With his ships destroyed, he steps up a colony aided by local Fae, strange humanoid creatures imbued with magic. This must be the spell-source they've been seeking. But unbeknownst to the colonists, the Dragons are watching and preparing to drive them off the island.

The war between people and Dragovians will force all the other island races—Fae, the plucky Hengeyokai, and the dark Oni—to pick up arms. Which side will you choose?

Spellsource takes place on the islands of the Lung Archipelago in a medieval fantasy setting. Outside the archipelago lies the The Mainland (also known as the Old World or just the Lotus Empire, its principle civilization).

Important locations include Pearl Colony, the principle settlement of the humans, and Moromah Island, the largest island of the archipelago. Mount Moromah is the geographic location of the largest city on the island, Atumjun. Its most unusual gateway is the Demongate.

A power struggle began among the Dragovians, the dominant race on the islands. Their Emperor has fallen into a deep sleep of magical origins, and the various tribes of the Dragovians suspect each other of betraying the throne. Meanwhile, humans have made First Contact with their arrival to the islands, as foretold by the Vision of Landfall.